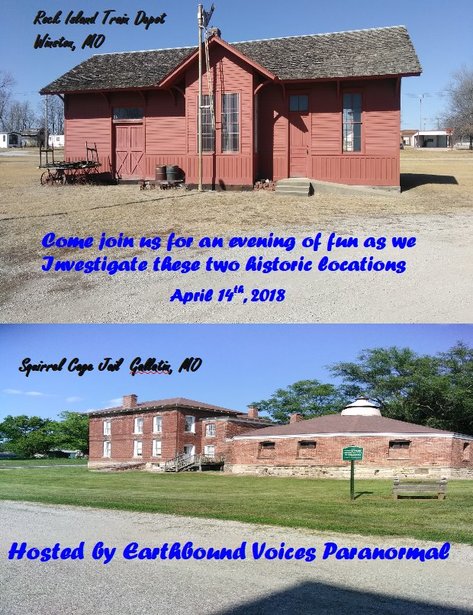 We are happy to announce that we have our first public event scheduled for April. Come join us for a night of fun and history.

Have you ever wanted to investigate a real haunted location with a paranormal group or better yet investigate two locations in one night? Please join Earthbound Voices Paranormal for the first public investigation of these two historic sites together for a night of fun and history. They are about 15 minutes apart and we will be splitting up in two small groups. The train depot was built in 1871 and was originally called the Rock Island Train Depot and is known as the Rock Island/Winston Depot. In 1881 the train was robbed about a mile down by the James and Young gang. During the altercation of the event there were 3 people killed, it is believed that they got away with $650. The second location of the night will be at the Squirrel Cage Jail in Gallatin, MO and was built in 1888 and there was originally 18 built. According to records this was the 15th built. As of today there are 3 still standing. This is a unique location as it is a rotary jail with one way in and out. It is built with all steel inside and brick on the outside. The sheriff’s home was attached to the jail and the sheriff’s wife received $2 a day to feed the prisoners, whatever the family ate is what the prisoners ate. We will be doing about an hour long presentation of history and going over equipment that we use in the paranormal field. Ticket prices are $40 a person.
​You can contact us via our Facebook page or email to reserve your spot.
earthboundvoicesparanormalkc@gmail.com